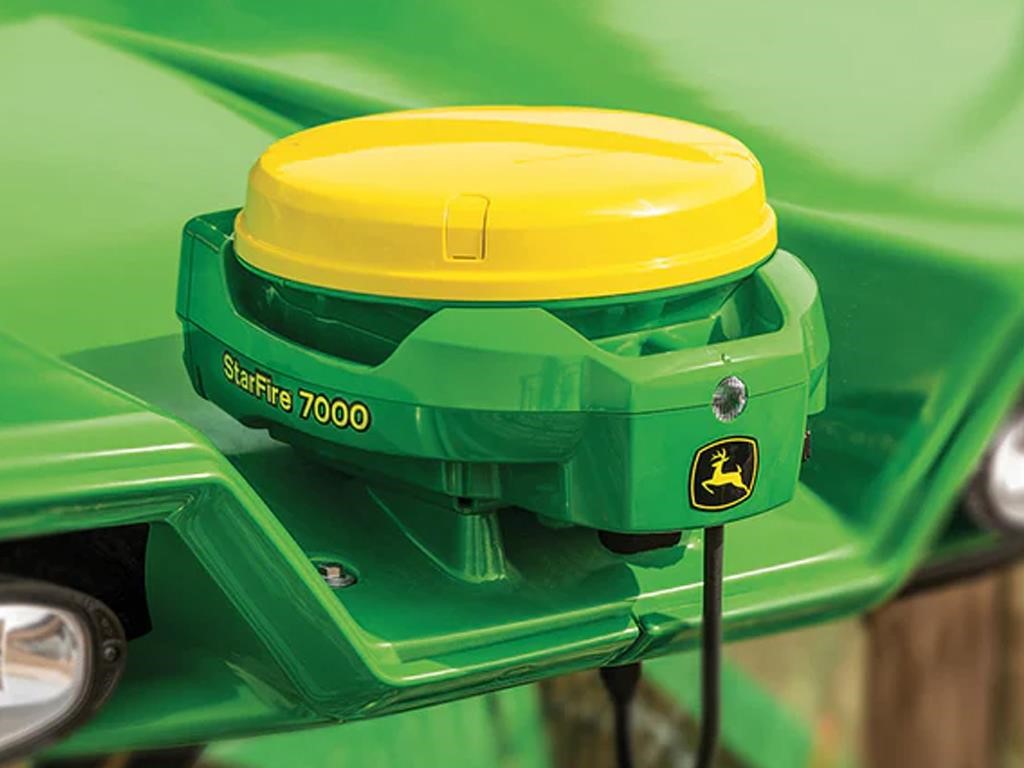 INCREASED PERFORMANCE WITH STARFIRE 7000 RECEIVER
The StarFire 7000 Receiver is the latest addition to the suite of Precision Ag Technology from John Deere. The StarFire 7000 Receiver offers greater accuracy, faster pull-in times, and season-to-season repeatability. This means less hardware, faster times recovering from a shading event, and the confidence that your guidance lines and boundaries won't shift from year to year.

RTK PRECISION WITHOUT THE RADIO
The StarFire 7000 Receiver offers a new correction level with accuracy like RTK Radio. The SF-RTK correction level provides 2.5-cm (1-in.) horizontal accuracy without the need for additional hardware. This is an improvement of 17 percent from the previous generation of StarFire receiver. The SF-RTK signal uses two additional satellite constellations (BeiDou and Galileo) as well as both GPS (United States) and GLONASS (Russia) satellites.

NOTE: Compare this to the previous StarFire 3000 Receiver that was only capable of tracking one StarFire signal at a time and could wait up to 4 minutes to initiate the switch to the next available signal.

Repeatability defines how accurately the receiver calculates its position over a relatively long-term window.

NOTE: SF-RTK uses satellite corrections only and does not require the use of an RTK Radio. RTK Radio may still be required in the following scenarios:

The choke plate hardware in the StarFire 7000 Receiver more accurately directs GNSS signals into the antenna. With the addition of this choke plate, there is a 66 percent reduction in the time it takes to acquire an SF-RTK correction signal from previous generations of StarFire receivers. This means you have more time to be productive and get the job done quicker.

The StarFire 7000 and StarFire 7000 Integrated Receiver use an integrated terrain compensation module (TCM) to adjust the calculated machine position based on the terrain on which it is operating. The TCM adjusts for roll, pitch, and yaw motion to improve receiver and AutoTrac system performance when operating in challenging conditions such as hilly ground.

ADVANCED TCM CALIBRATION
As accuracy and repeatability continue to be more important to get to plant-by-plant accuracy, the systems in place today must evolve to enable this capability. Like the StarFire 6000, the StarFire 7000 offers an Advanced TCM Calibration feature.

With Ethernet connectivity on the StarFire 7000 Integrated Receiver, you can save up to 60 minutes per year while performing over-the-air software updates to keep your technology in sync with the latest features.

NOTE: Repeatability may be impacted by large unpredictable geological events such as earthquakes.

VALUE OF REPEATABILITY
Repeatability defines how accurately the receiver calculates its position over a relatively long timeframe. Repeatability is measured at the receiver and does not take into account additional error sources such as AutoTrac control system error, ground conditions, or implement drift.

In-season repeatability is critical when using AutoTrac for multiple jobs throughout the growing season, such as creating AutoTrac guidance lines during planting, then using those same guidance lines to complete subsequent jobs like side dressing fertilizer, post-emerge spraying, and harvesting.

Long-term repeatability is critical when mapping interior and exterior boundaries for later use as input to John Deere Section Control on planters, sprayers, and fertilizer applicators. It is also critical for growers that use the same AutoTrac guidance lines over multiple seasons for operations like subsurface-drip irrigation, controlled traffic, or alternating planter spacing between the rows from a previous season.

NOTE: RTK Radio still requires the use of a compatible radio.

Increase operator comfort and ergonomics with footrest retrofit kit. Complete kit includes all parts and hardware without requiring any drilling or welding for your 4R Sprayer 7R 8R 9R Tractor back to 2009.
Read More
X