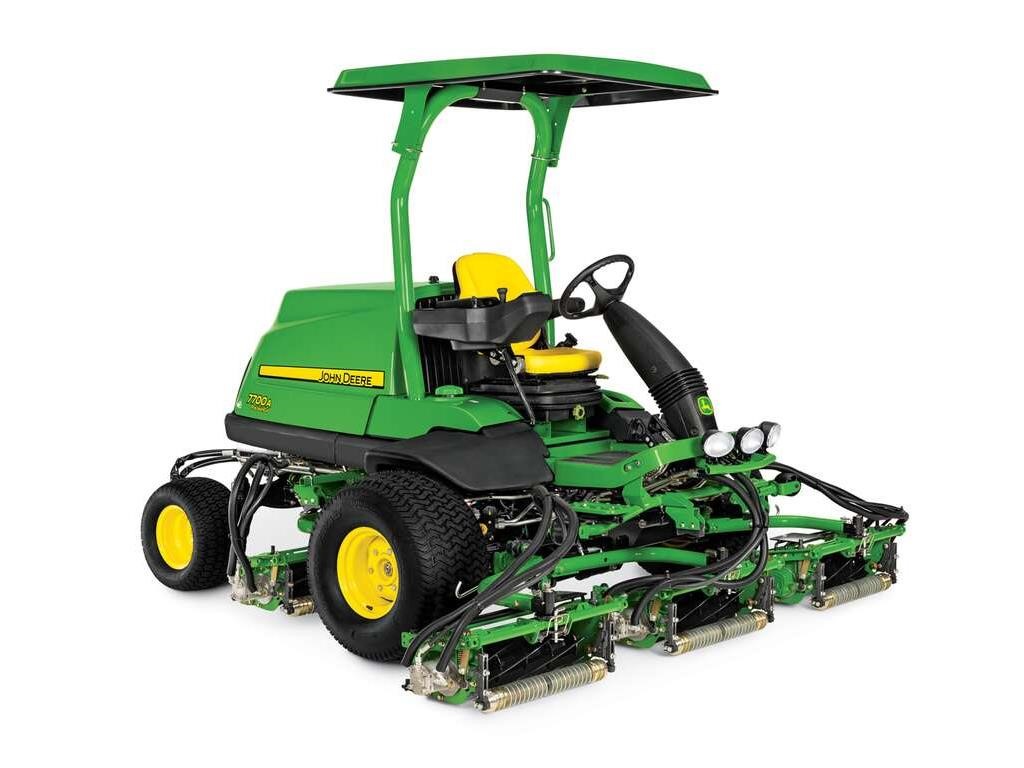 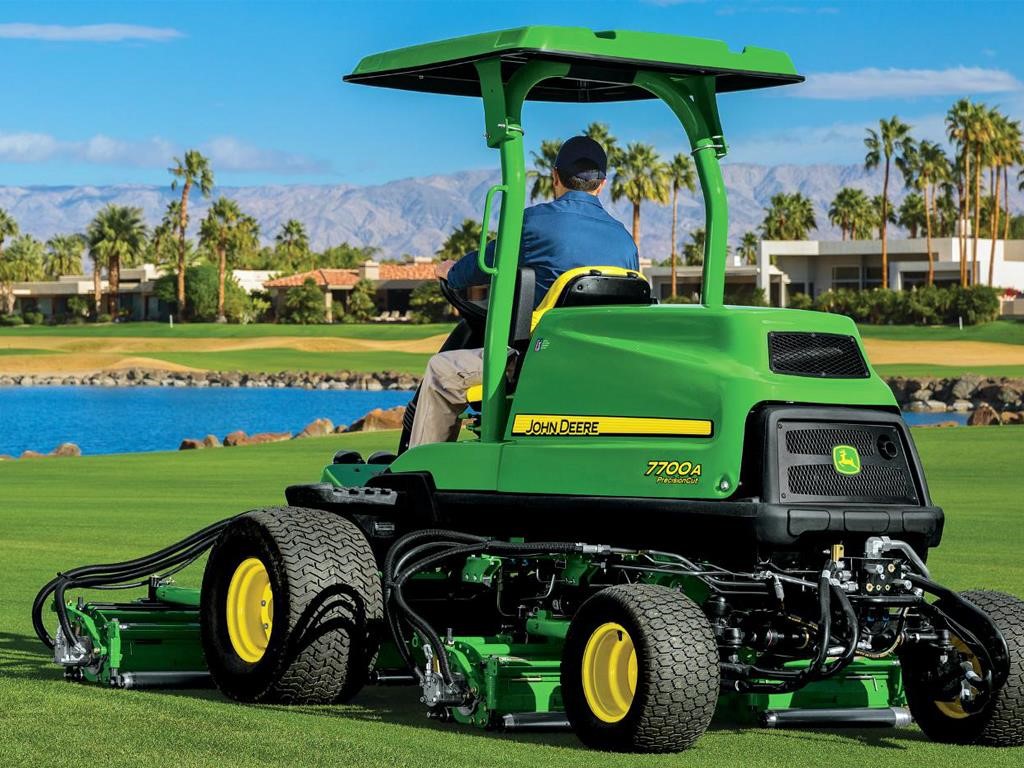 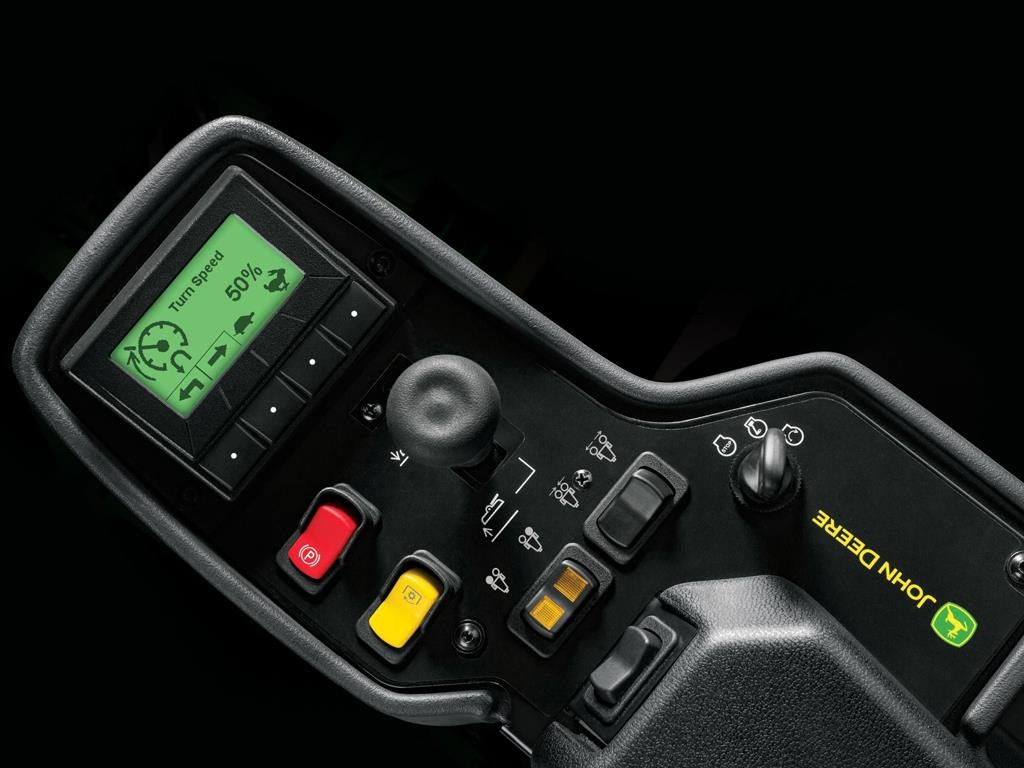 TRUSTED BY THE BEST

The PrecisionCut A Model Fairway Mowers offer several features that separate it from the competition. Like the eHydro hydrostatic pump and large capacity motors for serious hill-climbing capabilities. The GRIP All-Wheel Drive Traction System provides superior traction by reducing wheel slip. And exclusive LoadMatch lets you cut through wet, lush grass evenly by slowing down the traction speed.

Getting on or off these mowers is no problem, thanks to easy entry and exit points. And there are plenty of operator comfort features, like foot-operated tilt steering and a deluxe suspension seat with multiple adjustments for all-day productivity.

TECHCONTROL DISPLAY MAXIMIZES PERFORMANCE AND UPTIME BY ALLOWING MORE CONTROL IN OPERATION AND DIAGNOSTICS
Passcode-protected TechControl display enables quickly setting or changing mowing speed, turning speed, or transport speed to limit variations in performance by different operators. Quickly adjust the mow or transport speed to make sure mow speed is what is needed for the changing conditions. The setting can be adjusted precisely using a speedometer app on a smartphone or global positioning system (GPS) device.

Use the TechControl to slow the machine during turns while mowing and protect against turf scuffing and aggressive turning operators. The turn speed control engages when in mow and the cutting units are lifted for turns. Once the turn is made and the cutting units are lowered, the machine speed returns to the set mow speed. The turn speed is a percentage of mow speed. When set to 100 percent, turn speed control is off or allows 100 percent of the mow speed in turns. Turn speed setting of 50 percent allows only 50 percent of the set mow speed to be reached during turns.

eHYDRO HYDROSTATIC PUMP AND LARGE-CAPACITY WHEEL MOTORS FOR SERIOUS HILL-CLIMBING CAPABILITIES
The eHydro traction pump and wheel motors in the new A-model takes performance, traction, and operation to the next level. We designed the new system to take on the most challenging course conditions. These improvements to the traction system makes the A-models ideal for undulating terrain providing superior performance and traction out on the course.

The traction system in the A-models is driven by a servo-controlled hydrostatic pump. The control of the pump is no longer mechanical linkages but instead it is electronic. In total approximately 94 parts have been eliminated from the traction drive system along with 4 adjustments compared to prior models. The design reduced the complexity of the drive system meaning no more linkages to adjust or repair decreased routine maintenance and providing reliable day-in/day-out operation.

For example, if the front right wheel starts to slip, hydraulic flow is diverted to the left rear wheel to maintain positive traction. By allowing the flow to cross over to the opposite rear wheel, the system maintains traction not only while climbing straight up hills, but also on side hills, as well.

The GRIP All-Wheel Drive Traction System is always engaged when driving forward with the PrecisionCut and E-Cut Hybrid fairway mowers. There are no electronics to engage the 4WD system, simplifying the electrical system and the design of the valve at the rear of the machine.

In reverse, a standard switch is provided that disengages 4WD. The switch senses that the reverse pedal has been depressed and shuts off flow to the rear drive wheels. This ensures that the front drive tires are doing the work in reverse rather than the rear tires, minimizing wheel slip and scuffing of turf when backing up an incline.

TIRES SIZED FOR PROPER WEIGHT DISTRIBUTION AND A LOW GROUND PRESSURE
When considering a fairway mower's effects on turf compaction, there is more to it than just weight alone. Weight is only a small factor in determining turf compaction. A key component is the selection of tires used on the machine involves both sizing and tread patterns. The John Deere PrecisionCut and E-Cut Hybrid Fairway Mowers use large, 26x14-12 front tires for proper front weight distribution, and 20x10-8 tires in the rear to distribute the rear weight. Both tires use a turf tread to maximize turf friendliness. They excel in weight distribution providing low ground pressure onto the turf. This provides less tracking, less marking, and less compaction.

EASILY ACCESSIBLE DAILY SERVICE POINTS MEAN LESS MAINTENANCE TIME AND MORE TIME WORKING
Easier daily maintenance points are designed into the machine to assist operators with complete daily maintenance and to keep the machine running at peak performance, saving valuable time and money. For ease of service, all daily engine checks are easily accessible by raising the hood. These service points include an engine-oil level check, a coolant level check, hydraulic fluid level, and an air-restriction indicator. The A-model PrecisionCut Mowers, E-Cut Hybrid Mowers, and TerrainCut Mowers feature a radiator screen that is easily removed without tools and a tilt-out oil cooler for easy cleaning.

LOADMATCH ELECTRONIC SETTING COMPENSATES SPEED OF MACHINE TO KEEP POWER TO THE CUTTING UNITS TO MAINTAIN CUT QUALITY
LoadMatch is an electronic setting through the TechControl display that allows managers more control of the machine and how it is operated when out on the course. Most operators will mow as fast as the mow setting will allow, keeping their traction pedal all the way down. However, in some conditions this can lead to poor cut quality.

One example is getting behind in mowing due to weather conditions. The grass is long and lush and to properly cut that amount of grass at one time, the operator should slow the traction speed. This allows the cutting units to maintain proper turning speed, process the grass, and properly cut in one pass. Not slowing down causes missed grass and an uneven appearance. This affects the after-cut appearance and also reduces productivity by having to mow a second time to properly cut the lush grass.

On conventional machines, the engine rpm is controlled by the operator by means of a manual or electric/manual throttle. Operators are trained to always operate the engine at wide-open throttle. Running at wide open throttle means running the engine at its fastest speed, which increases the sound levels and fuel usage.

It is simple and easy to use RFS. Simply use one hand to pull up on the cutting unit yoke to remove weight from the RFS spring; use the other hand to push the spring lever down on the front cutting units. Then use the hydraulic lift system on the machine to pick the cutting units up, and they will move into the vertical position. Lower the cutting units to the ground; the bedknife will be completely accessible without having to remove cutting units from the traction unit or have access to a machine lift.

CUTTING UNITS ARE STABLE AND FOLD INSIDE THE FRONT TIRES FOR EASY TRANSPORTING
The 6500A, 6700A, 7500A, 7700A, and 8700A PrecisionCut and 6500A and 7500A E-Cut Hybrid Fairway Mowers all have cutting units that contact up stops for transport. These up stops are rubber and limit cutting units from swinging during transport. The lift system also folds the two wing units inside the tires to limit possibility of damage to the wing units when transporting through and around objects on the course.

Equipment may be shown with options. Specifications are subject to change without prior notice.

Similar models may be shown in addition to the featured model.
Express Financing Get Pre-Approved
Get a FR8Star Shipping Estimate

Increase operator comfort and ergonomics with footrest retrofit kit. Complete kit includes all parts and hardware without requiring any drilling or welding for your 4R Sprayer 7R 8R 9R Tractor back to 2009.
Read More
X