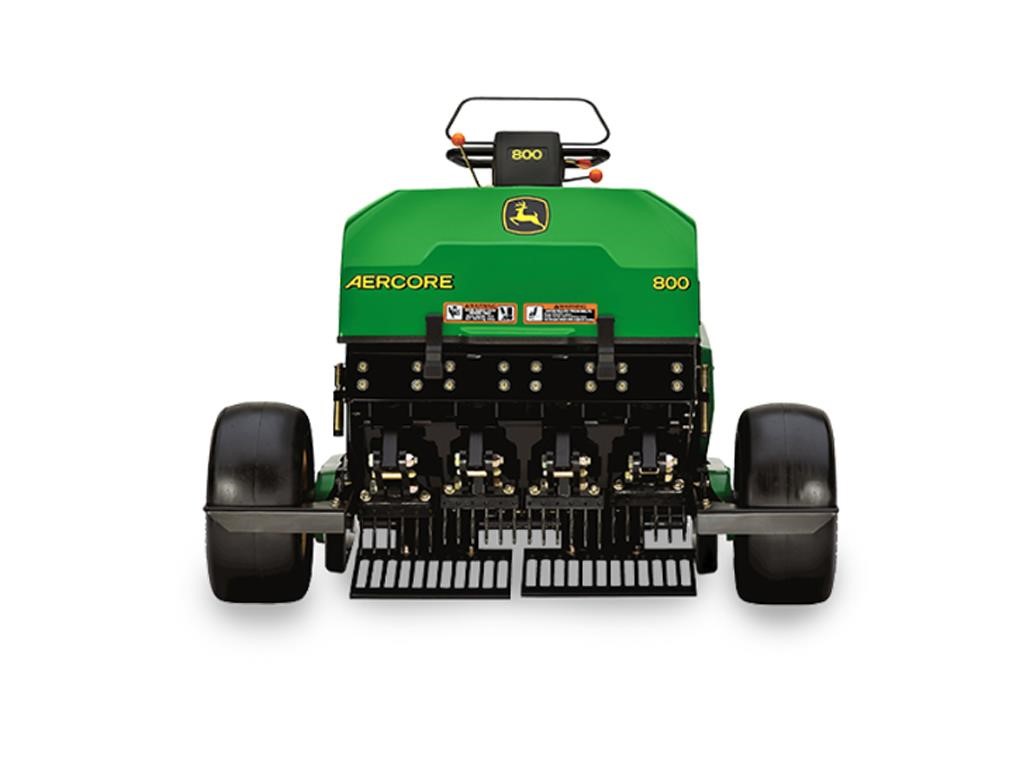 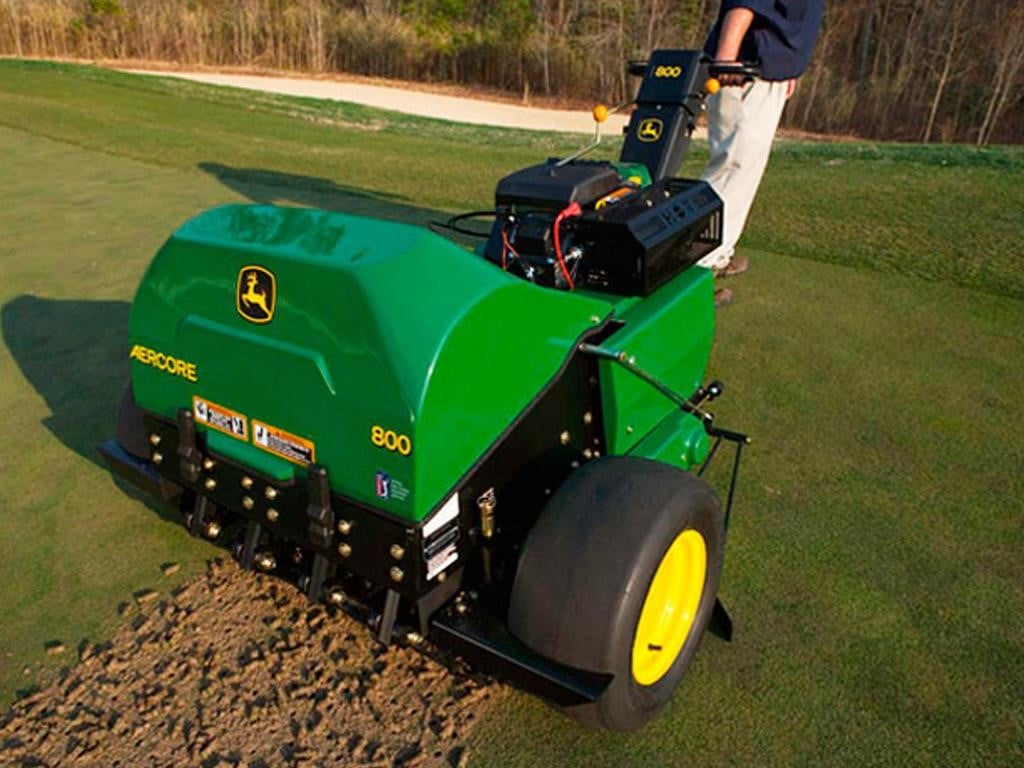 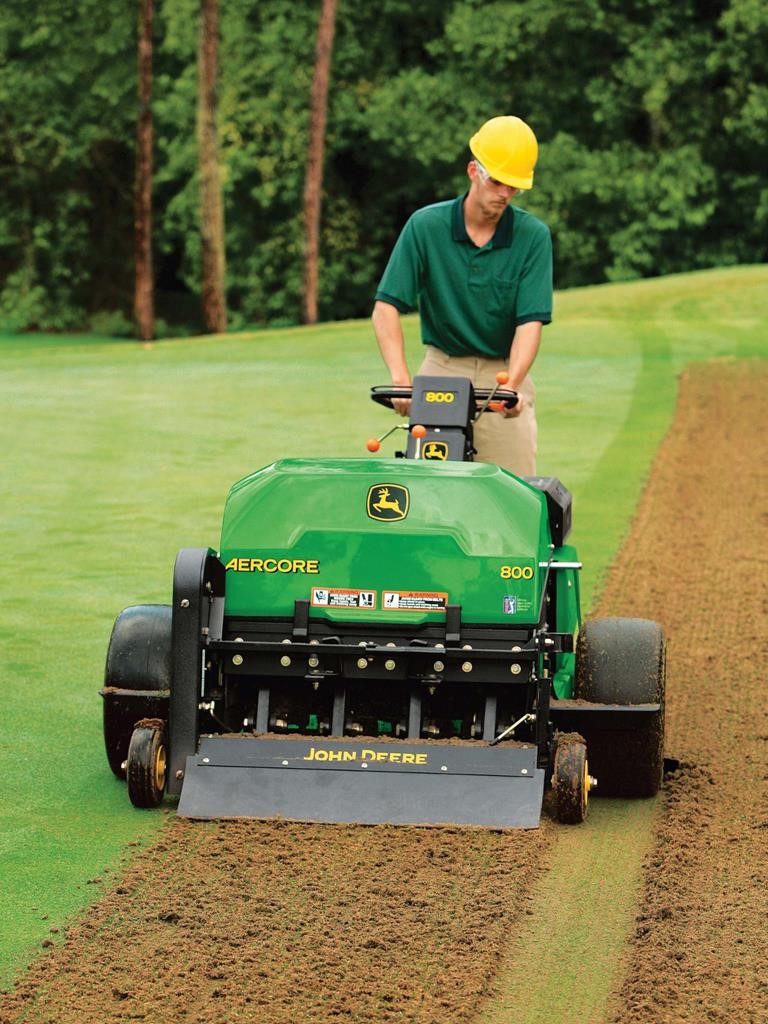 GOT ACRES OF AERATION AHEAD OF YOU? PUT AN AERCORE BEHIND YOU.

John Deere aerators employ a Flexi-Link design to ensure the tines stay perpendicular longer for a higher-quality hole without sacrificing efficiency. Easily accessible belts power the systems instead of chains, making them quieter and easier to maintain. For fast, quality results, they deliver every time.

If the coring head on any aerator were located anywhere other than precisely between the rear tires, a complex linkage system would be required in order to allow the coring head to float and follow undulations.

No such system is required on the Aercore 800. By locating the coring head precisely between the tires, the tining action perfectly follows the ground that is in contact with the rear tires. No complex linkages are required to enable the coring head to follow the contour. This also promotes consistency of hole depth across undulations.

Why do you mow greens with a narrower-width cutting unit? The answer is to eliminate opportunities for scalping, improving overall turf health and providing excellent cut quality. The narrower the cutting unit, the less risk there is of scalping the turf in an undulation.

The same principle applies during aeration. During aerification, you are looking to impact the top 3 in. to 4 in. (7.6 cm to 10.2 cm) of the soil profile. A narrow aerator is going to follow undulations much better than a wider one, keeping a more consistent depth throughout the aeration practice. A consistent depth means more compaction relief at the full depth of aeration and even more accurate topdressing applications.

The John Deere Aercore 800 does a much better job of keeping depth consistent across the entire undulation. Just like a greens mower, a narrow walk-behind aerator provides greater consistency on undulating terrain in comparison to wider machines.

INDUSTRY-EXCLUSIVE VERTICUTTER ATTACHMENT GIVES MORE VERSATILITY THAN ANY OTHER WALK-BEHIND AERATOR IN THE INDUSTRY
The verticutter attachment may be fitted to any Aercore 800 machine equipped with the 25-hp Kohler Command Series engine.

The verticutter utilizes carbide-tipped blades and may be operated to a maximum depth of 1-3/4 in. (44.5 mm) in any of the Aercore 800s four operating gears. Soil conditions will determine whether or not maximum depth can be achieved.

Featuring a precise, no-tool depth adjustment, the verticutter attachment allows superintendents to operate at virtually any depth up to 1-3/4 in. (44.5 mm).

A convenient handle and transport bracket allows the operator to lift the verticutter to a higher position for transporting.

By utilizing the same electrohydraulic lift/lower system currently on the Aercore 800, an operator may raise the verticutter without the engine running.

Standard tire scrapers for the verticutter eliminate any debris buildup to maintain a consistent verticutting depth.

Superintendents choosing to verticut only may do so by simply disengaging the two coring head belts and securing them with the provided belt latches.

For golf courses that aerate and verticut as part of the same practice, the Aercore 800 equipped with the verticutter attachment allows both aerating and verticutting operations to be performed at exactly the same time. The simultaneous operation yields time and labor savings compared to traditional methods.

POWERFUL 25-HP*(18.6-KW) GAS ENGINE PROVIDES PLENTY OF POWER FOR AERATING AND VERTICUTTING SIMULTANEOUSLY
The Aercore 800 utilizes a 25-hp (18.6-kW) gas engine. Why this much power with a 31.5-in. (80-cm) walk-behind aerator? There are two primary benefits.

Turning the engine as slowly as possible without stalling is key. The increased power provides sufficient power to the coring head at a reduced rpm to further improve entry and exit hole quality. This reduced rpm is preset from the factory and, in most cases, should not need further adjustment.

The second benefit is the Aercore 800 offers an optional verticutter attachment to provide an industry-exclusive aerating and verticutting combination. This tandem offers a productive and versatile option that no other competitor can do.

The 25-hp (18.6-kW) engine allows the verticutter alone to operate at a depth of up to 1.75 in. (4.4 cm). Also, the increased horsepower allows the aerator and verticutter to be run simultaneously to impact even more surface area and further reduce compaction as part of the aeration process. Course conditions will dictate how deep the verticutter can be run in combination with a maximum aeration depth.

FIVE-SPEED MECHANICAL TRANSMISSION ELIMINATES HYDRAULIC LEAK OPPORTUNITIES ON PLAYING SURFACES
Hydraulic leaks are a superintendent's worst nightmare. Not only do they have the potential to damage significant amounts of finely manicured turf, but in many cases, if the fluid is not biodegradable, the turf area must be dug up and replaced. Not to mention the dissatisfaction of the golfers who must play on unsightly turf that has been damaged by a hydraulic leak.

A mechanical transmission ensures hole spacing will be consistent and precise across every aeration pass. The gear selector is conveniently located within the operator's reach for easy speed and spacing selections.

The integrated operator-presence bail system allows the operator to easily stop the machine by simply releasing the bail to bring the machine to a quick stop, should the need arise. In addition, the steering radius is limited in transport mode to provide even safer operation during transport.

LIGHTWEIGHT DESIGN AND 9-PSI (62.1 KPA) OPERATING TIRE PRESSURE MINIMIZES TURF COMPACTION
The Aercore 800 was designed to be turf friendly. From adjustable turf guard pressure, to the Flexi-Link design, to the hydraulic-free mechanical transmission, the Aercore 800 is a market leader in turf friendliness.

But the design goes much further than just its key product features. The Aercore 800, including its innovative components, weighs only 1367 lb (620 kg), very lightweight for a very productive aerator. The next closest competitor in terms of productivity weighs 1590 lb (721 kg). The goal of aeration is to relieve compaction from everyday machine use, and John Deere has limited the compaction of the aerator itself by keeping the weight of the machine under control.

Even when you add the industry-exclusive verticutter attachment to the Aercore 800, it only weighs 1442 lb (654 kg), still nearly 150 lb (68 kg) lighter than the most-productive competitor.

Not only does the Aercore 800 offer a lightweight design, it also has a very low operating tire pressure to further spread out the footprint of the machine and minimize turf compaction. The Aercore 800 utilizes a tire pressure of 9 psi (62.1 kPa), where the closest competitor in its class in terms of productivity uses 12 psi (82.7 kPa) of tire pressure.

ELECTROHYDRAULIC LIFT SYSTEM ALLOWS LIFTING THE CORING HEAD WITHOUT THE ENGINE RUNNING
The Aercore 800 Aerator features an electrohydraulic lift and lower system. When looking at a typical hydraulic lift system alone, it means the engine must be running in order to lift and lower the coring head. The engine physically turns the pump that controls the hydraulic system.

If the machine runs out of gas or there is an engine failure during aerification, raise the coring head out of the ground by simply leaving the key switch in the run position and pressing the lift switch. Or simply release the operator-presence bail and the head automatically raises out of the ground. No need to break out the tools and start removing tine holders and turning hydraulic dump valves to remove the machine from the green.

Aren't hydraulics bad for greens if they leak? Yes, but not on the Aercore 800. The hydraulic fluid on the Aercore 800 is biodegradable. If it leaks, it does not need to be removed from the turf. Plus, since the only function is to lift and lower the coring head, it is not constantly being used, keeping the oil cool and preventing any heat damage should the system leak.

The speed at which the electrohydraulic lift/lower system operates also optimizes entry and exit hole quality. The head raises and lowers very quickly, getting the tine perpendicular to the turf as quickly as possible.

By preventing the tires from running over pulled cores, the drive tire core deflectors improve the green cleanup process after aerification.

It is important to note it is not an issue to run over previously punched holes with a walk-behind aerator. All greens require a cleanup and topdressing process once aerification is complete. People and machines are used on the greens to pick up cores and distribute topdressing, so the newly punched holes will get run over several times before the topdressing is put down.

The key issue is to ensure cores are not mashed down into the turf, hurting the effectiveness of the cleanup process and filling holes with undesirable material. The drive tire core deflectors do an outstanding job of making sure your greens are ready for the cleanup process, ensuring a more effective topdressing application that fills the new holes with desirable amendments.

To further enhance serviceability, the Aercore 800 features sealed bearings throughout the entire coring head system. This simplifies maintenance and, once again, ensures excess grease is not dropped onto playing surfaces.

The belt drive system uses a cogged belt and cogged pulley. This makes it possible to time the coring head, limiting machine vibration and ensuring a perfect hole pattern.

Timing the Aercore 800 is simple. Loosen both coring head idler pulleys so the belts can be moved away from the cogged pulleys. Use the bottom of the turf guards or a reference point on the frame to line up the outside two arms with one another. Naturally, the inside arms should be closely lined up as well. Slip the belts back on and tighten up the idler pulleys at the proper belt tension. The Aercore 800 is now in time.

The matched pair of cog belts provides long life and requires minimal adjustments. Even the occasional belt replacement is made easy by having all the belt drive components located on top of the machine where they are easily accessible.

SIMPLE NO-TOOL DEPTH ADJUSTMENT RESTS ON CORING HEAD FRAME FOR CONSISTENT DEPTH
The Aercore 800 utilizes a pin and spacer system to establish aeration depth. This provides a simple system that is both easy to use and requires no tools for adjustment.

The depth adjustment on the optional verticutter attachment also requires no tools for adjustment. Just loosen the locking nut using the attached lever, and move the wheel up or down until it lines up with the desired depth.

Because the verticutter counterrotates to the direction of travel, the blades are always being pulled into the turf. Therefore, you do not have to be concerned about the verticutter depth changing during operation.

Nothing Works Better Than Genuine John Deere Batteries and Save 10% the Entire Month of October. Cross Implement Your Local John Deere Dealer Serving You From Central Illinois
Read More